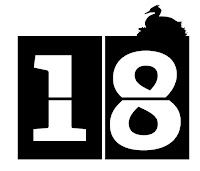 (with apologies to The Sweet)

Saturday night was my very first bio blitz, at the National Trust's Souter Lighthouse.  It was actually over a considerably larger area since the National Trust team there manage Whitburn Coastal Park and the Leas up as far as Trow.  It was a 22 hour bio blitz, starting at 8 pm on Saturday night and therefore obviously finishing at 6 pm on Sunday.  Unfortunately I had other (Fathers' Day) plans starting at about 10 am on Sunday morning, which would mean that I'd miss out on a lot of the fun, but with moth trapping, bat walks and Storm Petrel ringing happening overnight I was definitely up for a rare all-nighter.

This was a really big commitment for me.  These days I'm very much early to bed, early to rise, something that's only really come about over the last few years, and I start struggling at about 10 pm.  Also, as I was travelling there by Metro, I really was stuck there until about 6 or 7 am on Sunday!  But I've never seen a Storm Petrel so that was a major draw.  I'm also finding myself increasingly drawn to moths and bat walks are always cool. 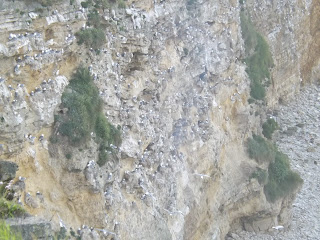 I started with a walk down the Leas before I got to Souter.  This section of coastline is one I've only discovered in the last year or two and I love it.  The twisty cliffs are so different to the long sandy beaches I'm used to in Northumberland.  It's also great for migrants and one of the best places I've found to watch Fulmers as they keep soaring up over the edge of the cliff right in front of you.  The birds were singing, the seabird colonies smelt magnificent and I found a rather faded looking Painted Lady. 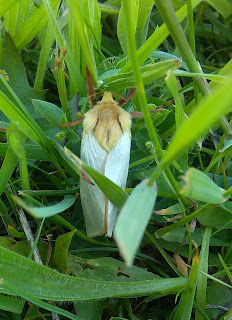 I arrived at Souter Lighthouse at about 7ish, and met some of the team there.  Jason, Doug, Trevor and John were all really nice lads and great fun to knock about with for a while down there.  They were also really informative and supportive.  I got to have a wander around some of the areas of the coastal park that are normally off-limits to the public, and set small mammal traps with them through the shrubbery on one of the mounds and then around one of the ponds where I found one of my best sightings of the night, a Ghost Moth in the grass.  It was before 8 pm though, so didn't count towards the bio blitz.

When 8 pm came we started counting the bird species we could see, and then got the ringing nets for the Storm Petrels set up with another really nice, friendly couple of people, Andrew and Georgia, a regular ringer and ringing-viewer.


Things seemed to go pretty quiet for a while after this.  Andrew, Georgia and I stayed by the nets at the cliff top, while everyone else seemed to vanish off somewhere.  I occasionally got the feeling that maybe something exciting was happening elsewhere, but didn't have a clue where.  Maybe this is one of the problems of it being such a big site.  It turned out I wasn't really missing out on anything other than getting the moth traps set up. 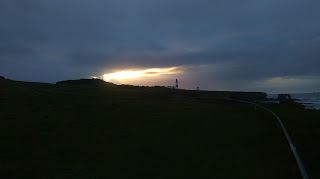 It was finally turning dark and Souter Lighthouse at sunset was looking rather lovely. The sky to the north was cloudy, though the nearly full moon to the south was shining brightly in a fairly clear sky.  We also managed to spot and identify three different planets, Mars, Saturn and Jupiter, though we couldn't make out any moons as it was still fairly light.

We managed to get the tape lure working for the Storm Petrels, and then fancying a bit of a change I had a drive around with Doug and Trevor, looking for Hedgehogs and Foxes, without any success.  They dropped me off with Jason, who was doing some newt surveying in the pond near where John was keeping an eye on one of the moth traps.  He'd caught what he called another Ghost Moth but which could well have been the one I'd found.

The newt survey picked up well over a dozen Palmate Newts, as well as leaches and lots of little fish that would be identified the next day when pond dipping.

This leads neatly on to one of the problems with my night-time adventure.  Because I wasn't there on the Sunday I felt like I was missing out on an awful lot.  I was there to set the mammal traps up, but not there to check them.  Likewise with the moth traps, which would be checked next day.  I was also missing out on bees, butterflies and dragonflies.  Next year I'm going to make a determined effort to be there for the full thing!

We all headed back to the bird nets at the cliffs where we found that nothing had been caught at all.  This wasn't really a surprise at this point, because all night people had been giving me reasons why we wouldn't catch any Petrels: it was still early in the season; the moon was too bright; the sea was too rough and loud; it was too clear.  There'll be other opportunities though, this year, and as I said at the time, even with all those factored in, my chances were a lot better than if I'd stayed in bed.

It was getting on for 1 am by this point, and it was looking like things would be relatively quiet until 6.30 by which time I'd have to be thinking of leaving, so I cut my losses and managed to blag a lift home with Andrew who, as luck would have it, was dropping Georgia off a few streets away from my flat.

Just as we were leaving, Andrew got a call from Jason at the nets, and we ran back, thinking he'd maybe got lucky as soon as we left him alone.  It turned out that he hadn't caught a Petrel, (they were at it until 3.30 and never got one) but a Pipistrelle Bat had flown into the net, so we got a good close look at that as he released it.

Despite the relative lack of sightings, it was a fantastic night.  I met some lovely people and made some great contacts, and I'll definitely be back down there to try for Petrels again.  I'll also know who they are next time I see them out and about on the Leas, which is always nice.  Also, how many people can say they spent a night at Souter Lighthouse and saw a genuine ghost?