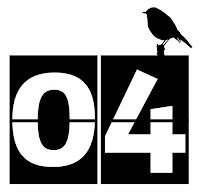 Truth be told, I was a little nervous about this one.  It was going to be my first time wild camping in England, rather than in Scotland where the law is a lot more on the side of the camper.  But I'd wanted to do this trip since the start of the year, and I've vowed to do things this #30DaysWild that pushes my limits and scares me a little. So I headed down to Wykeham Forest on the North York Moors with my hammock for 24 hours living wild in the forest.

I'd already put it off a couple of times, when the weather didn't look quite right or I had other priorities, but this time I had several days totally free and the weather looked absolutely perfect for a spot of raptor watching from the Wykeham Forest raptor viewpoint, so, large backpack on my back I set off for a long bus ride from Newcastle to Scalby, just north of Scarborough, a mere seven miles walk from Wykeham Forest!

One of the nice benefits of going somewhere for an overnight trip instead of going there and back in a single day is that there is a lot less pressure to get an early start.  When heading up into Northumberland or across to Cumbria I'm frequently out before 7am.  On Saturday I was a tad more leisurely and ended up on the 10:50 bus.  My planned stop-off at Scaling reservoir was knocked on the head when the bus started climbing up onto the North York Moors into ever thickening mist.  There wasn't much point going birding somewhere I wouldn't be able to see the birds, so I stayed on until Scalby, where the sun was shining and the sky was blue.


The route from the village to the forest was nice and easy to find because it followed a long-distance route, the Tabular Hills Walk, from "door" to "door" and was really clearly signposted. I have no idead where this path ultimately leads to, but it really helped to eb able to follow it. 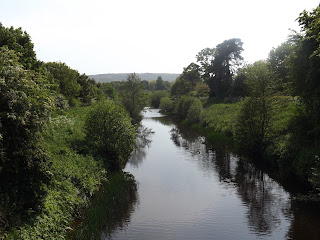 It started with a really pleasant walk along a slow moving stream, with a Painted Lady butterfly leading me down it for a while and then a Sparrowhawk cut straight across my path and disappeared into the trees opposite. 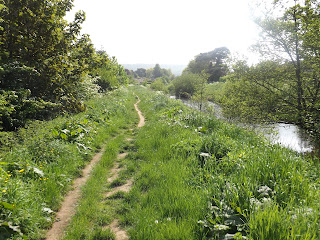 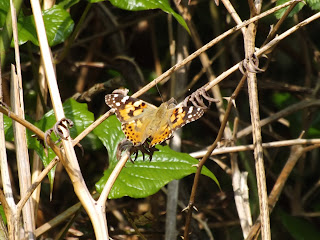 The sun was shining, the birds were singing, and all was right with the world.  There were Orange-tips everywhere, maybe half a dozen Painted Ladies and more Diamondback moths than I cared to count. 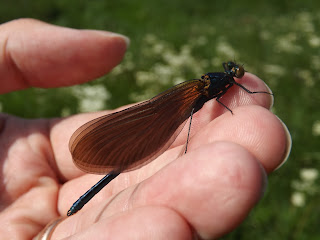 Then, something whirred over my head.  At first I assumed it was another butterfly, but when I managed to find it I discovered a damselfly, and not just any damselfly but an immature male Beautiful Demoiselle.  This is a damselfly I've wanted to see ever since I first heard its name and saw a drawing of it three or four years ago, and this was my first one! Not something I'd been expecting to see on this trip but very, very welcome nevertheless.

After the river, I had a mile or so to walk along a country road and then a short and very steep hike up Lang Gate, into the forest itself.  From there it wasn't too far to the first viewpoint, where I found some trees that looked suitable for hanging my hammock from.  I walked along to the raptor viewpoint, where disappointingly everything I could (almost) see was shrouded in mist.  This wasn't the weather I'd been expecting, and I started to get a little concerned that if the Sunday was the same I wouldn't be seeing many raptors.  I made myself some dinner, relaxed for a while, explored a bit and then settled down in a clear fell area just next to the viewpoint to try and see some Nightjars.

Unfortunately I failed to see or hear any Nightjars there, though I was treated to a fantastic roding Woodcock flying back and forwards over my head making that wierd little call they make.  It was already the best views I'd had of this usually secretive bird before he landed on a large pile of stones just two metres in front of me.  It was a chill and misty night, which may have kept the Nightjars away, or they might have been putting on a fine show elsewhere.  I'd seen several other birders earlier in the evening who must have been looking somewhere else.  At about 11 I headed back to the first viewpoint, where I put my hammock up in the dark, so as not to disturb the young couple parked up in the car park, who I guess were waiting for someone who never arrived.  It was the first time I've used my hammock without a tarp shelter over the top, which was really quite lovely.  You feel so much more out in the open that way, whereas with the tarp you are effectively in a well ventilated tent. 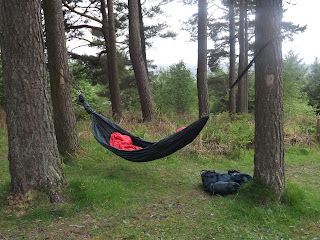 I love my hammock.  It's so easy to set up and is really quite comfortable when you get it right.  This trip had another purpose: I'm hoping to contribute to Alastair Humphreys' Great British Summer Microadventure Challenge details here. A few isolated drops of water fell on my head, possibly from condensed mist in the trees above me but never enough to be a problem or to justify putting up the tarp cover.
The next morning was initially still fairly misty, but it soon cleared into a beautiful sunny day.  After a few hours of watching from the raptor viewpoint with a couple of very friendly birders from Leeds and York, we were rewarded with splendid views of  the first reported Honey Buzzard in the forest this year, doing its wing-clapping display flight and heading slowly down the valley past us before disappearing into the trees opposite. Later in the morning I got chatting to a couple who'd come up from Norfolk for a week.  Without these encounters I think it could have been a very long, lonely vigil there, but with them it was a thoroughly enjoyable experience.  The guy from Leeds told me that he'd made it his aim in recent years to see all 15 British birds of prey species, which got me doing a lot of working out on my fingers as to which ones he meant.  I'm pretty sure that with the addition of Honey Buzzard to my life list I've now seen all fifteen, with bonus points for a Red-footed Falcon. 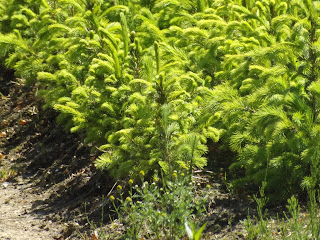 I left them all to it at noon, to spend some time exploring the tree nurseries before I headed back for my buses home. I'm not sure what I expected the nurseries to be like, but they are absolutely amazing: field after field of tiny little trees that made me feel like a giant in a forest. 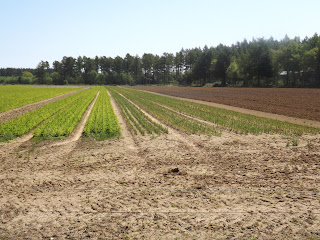 They are all tightly packed together and stretch on for such a long way.  Different parts of the nurseries have trees at different stages of growth.  I guess its pretty obvious that this is where the big trees originally come from, I've just never considered it before or expected it to be quite on this scale.

The nurseries are also a favourite with Turtle Doves, and I coule hear several purring as I walked around it, and finally managed to see a couple.  Another addition to the life list.  The final bird of note was a rather lovely Goshawk just as I was leaving the first viewpoint on my way home.

I'd allowed rather more time than was necessary for the walk back, as I got down the steep Lang Gate a lot quicked than I got up it.  This turned out to be a very good thing, because it meant that I had time to stop at the really rather lovely Everley Country Cafe on the way back for a chilled glass of limonata and a slice of lemon drizzle cake.  According to their visitor logbook they sometimes get Goshawk sightings from the cafe's garden, and I couldn't think of a nicer place to sit and look for one.  I'll definitely be back to try their scones and tea!

I got back to Scalby for 3:30, exactly 24 hours after I'd arrived there, feeling tired but very happy with my trip.