Healing Touch of the Wild

Last Wednesday morning I left a work programme workshop feeling rather anxious. There was no real reason for it, just that frustrating and faintly ridiculous feeling that something is wrong based solely on someone's innocent comment.  There was only one thing for it: spending the afternoon walking in one of my favourite parts of Northumberland, Druridge Bay. I started at the excellent Drift Cafe just outside Cresswell, and then after a delicious scone it was on to Cresswell Pond where a couple of pairs of Avocets were still trying hard to breed and looking as elegant as ever.  A pair of Knots were also present, though it took me a little while to convince myself that they weren't the Curlew Sandpipers that were listed on the board for a few days earlier.  They steadfastly refused to fly and show me their tail patterning and I finally gave up when they fell asleep. 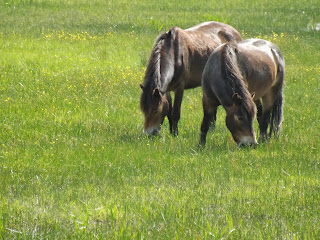 Druridge Pools was fairly quiet, the main highlight being some colourful Black-tailed Godwits, a Brown Hare on the far side of the Budge field and large numbers of Blue-tailed Damselflies all along the path.  The ponies were also looking rather lovely from the Budge Screen.  I do love seeing these ponies grazing on the Budge field, something so natural and right about that kind of land management technique. 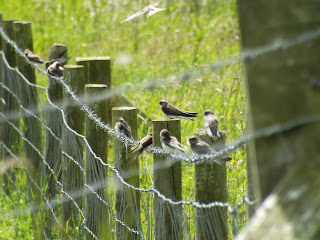 Last time I was at Druridge Pools I was lucky enough to have a pair of Swallows perch right in front of the hide for some simply stunning views.  This time all of the hirundines kept perching on the fence to the right of the hide.  They were mostly Sand Martins with a few Swallows and looked lovely enough for me to wish I'd had a better view of them.

I had a quick look at the fields leading over to Chibburn Preceptory, hoping to maybe catch a Yellow Wagtail among the cattle there, but the grass in the fields was really long and didn't look too promising, so I headed straight up to East Chevington. 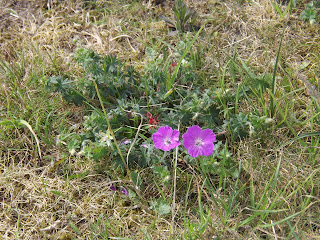 The wild flowers between Druridge Pools and East Chevington were one of the real highlights of my day.  I really don't know much about flowers, but I've learnt enough to identify the Bird's-foot Trefoil (an excellent butterfly resource) and Northumberland's county flower, the Bloody Cranesbill, some of which was starting to show the red leaves that give this purple flower its fantastically gory name. 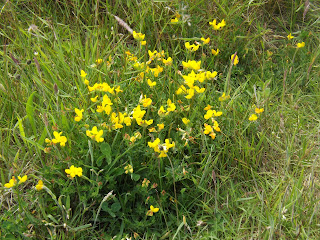 I didn't stop for long at East Chev because I was started to get concerned about bus times home, but while I was in the middle hide I picked up a Marsh Harrier on the far side that circled around and then flew the whole length of the North Pool before dropping into the reeds.  Seeing these fantastic raptors in Northumberland still thrills me, even after seeing them in much greater numbers already this year at Blacktoft Sands and Leighton Moss. 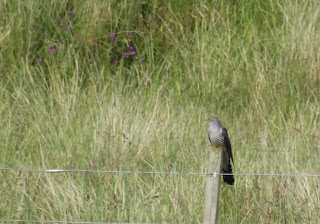 Hurrying back to Cresswell for the bus I nevertheless had to stop when, passing Druridge Pools again, something flew straight across the road in front of me.  I raised my binoculars thinking "Sparrowhawk or Merlin?" only to find that it was a Cuckoo, one of my key target species left for this summer.  It was being harrassed by Meadow Pipits, and perched on a fence post on the edge of the dunes where I got the best views of this lovely bird I've ever had, and then flew north to another post further away.
I managed to make it back to Cresswell just in time for my bus home.  Heading back to Newcastle, I felt so much better within myself than I had when I first set out.  The natural healing touch of the wild had worked its magic again.