A couple of days after my butterfly hunting trips, I was planning a quiet day in getting caught up on housework, but the sun was shining so I forgot all about that and went to Gateshead looking for dragons instead! 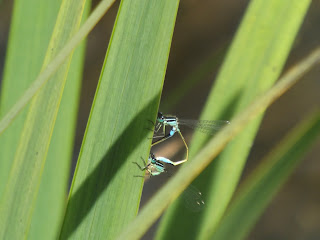 I started with a bus to Derwenthaugh to look for Banded Demoiselles, one of our most beautiful insects.  I had a great day here last year, when I saw them at three different points along the river with the help of local guide and expert, Alan Mould.  Alan's blog, found here, is essential reading for anyone interested in seeing dragonflies in the Gateshead area.  This year was a very different story though.  I started near the bridge where I'd seen several Demoiselles last year, but the winter floods had washed away most of the vegetation that had been here and what had replaced it didn't look at all promising. Giving up here I walked along to the outlet at Clockburn Lake, which had been turned into a muddy mess, apparently by the Council.  I checked out the river before the outlet, which held nice numbers of Blue Damselflies, but no Demoiselles could be seen.  I headed back downstream to a small outlet where I'd seen my first Demoiselle last year but that too was bare and unpromising.  I finally gave up, disappointed at not seeing this lovely species and disheartened at what had happened to their habitat.

Three buses later, I was at Kibblesworth Village, a short walk from the excellent Bowes Valley Nature Reserve.  I'd been here in June, when there were plenty of 4-Spotted Chasers around and a single Broad-bodied Chaser, but today I was hoping for Emperors and Black-tailed Skimmers, a dragon I'd never seen.

The large pond looked quite quiet at first.  The first indication of anything bigger than a blue damsel was a large silhouette over the surface.  I was able to pick out a couple of Emperors, a year first for me, and there was something else smaller flitting around that I couldn't quite catch.  Someone else appeared out of the vegetation on the far bank then, someone who was able to guess who I was.  It turned out to be Rob Stonehouse, a keen birder who I'd spoken to a lot on Twitter but not actually met.  I showed him the Emperors I'd seen and we talked about how odd it was that 4-Spot numbers seemed so low when there had been plenty around earlier.  As we were doing another circuit of the pond I spotted a powder blue dragon that I called as a Broad-bodied Chaser but which Rob correctly identified as a Black-tailed Skimmer, and I had my lifer! 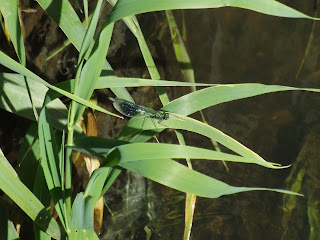 I'd told Rob about my lack of success with the Demoiselles, and he suggested a different site, at nearby Lamesley Pastures, and then proceeded to drive me down there and point out a couple of female Demoiselles to me, sitting just below the bridge.  One was doing flying runs off the vegetation a little further up, and kept settling on the water and floating down with the current before flying up again.  The beauty and charm of these lovely insects won me over all over again!
Posted by Liam at 06:02

Email ThisBlogThis!Share to TwitterShare to FacebookShare to Pinterest
Labels: dragonflies