Last Friday I went on my third boat trip of the year, and my first pelagic.  The trip was run by Martin Kitching of Northern Experience Wildlife Tours, and I'd booked through the Northumberland Wildlife Trust.  Martin turned out to be an excellent, friendly and knowledgeable tour and for four hours he took us out to sea and up the coast as far as Cresswell.

Unfortunately we didn't see any dolphins on my trip, and there was no sign of the Sperm Whale that had been seen on the Wednesday, though we did get a tantalising single large splash at or around where it had been seen, though nothing else was spotted there.  There weren't many skuas or shearwaters around yet either, still too early in the season.  These are what I'm really hoping to see, because I've only ever seen them as dark splodges far out at sea, but I've already got two more boat trips booked in September that hold more promise and I'm very tempted to book again with Martin.  We did get a handful of Manxies though, including excellent views of one shearing around not far from the boat. 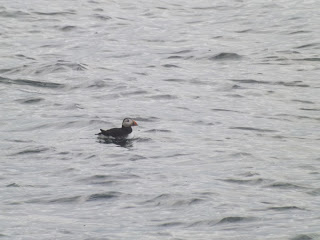 We did get plenty of auks and gulls.  As is usual with these trips, we got excited at the first Puffin or Guillemot, and then pretty soon they were everywhere, though never in the numbers you get around the islands further north.  This was more than made up for by some of the best views of Gannets I've ever had, including several swimming on the sea. 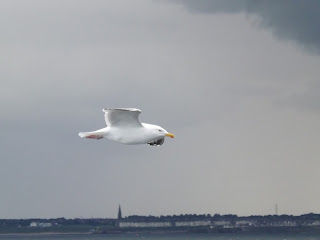 We were also followed continuously by Herring and Lesser Black-backed Gulls, who would hang in the air just behind the boat.  One of the other passengers, David, noted a particular Lesser Black-backed Gull was constantly flying alongside us, landing, waiting for us to move on and then catching us up to repeat the whole exercise. 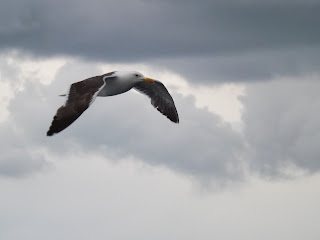 One of the absolute highlights of this trip was this scenery.  I'm a big fan of the Northumberland coastline, and it was quite special to see it from a whole new angle.  The weather added to the whole effect.  When we set off, the shoreline was black with storm clouds.  These slowly cleared and a narrow band of rain went over the boat.  On the way back south the sun was setting behind the cloud, giving some truly spectacular skies.  And it's not often you can see The Cheviot, Simonside, Spanish City and Souter Lighthouse at the same time!

Despite the lack of target species sightings, this was an excellent trip, and one I'd love to repeat later in the season.  I'm also rather tempted by the ten-hour version! 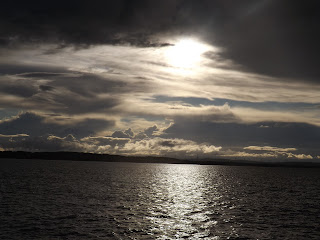 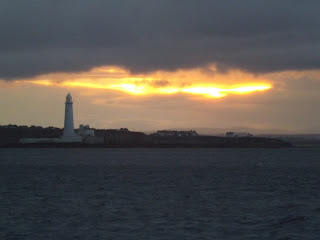 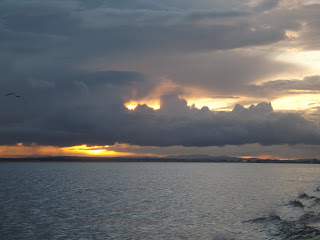