My children are wild!

This is a good thing, a really good thing. Research has shown that contact with nature and the wild world around us is excellent for a child's development. It builds confidence and curiosity and reduces stress and anxiety levels. We fit as much wildness as we can into their everyday lives, though it can be hard around school, homework, friends and sleepovers, dance classes and circus classes. What was a real treat was to be able to take them away for a week in the summer for a truly wild week in the Lake District.

To make it a little more exciting, we combined the trip with a Family John Muir award. I find kids love having that kind of recognition to motivate them, and the idea of getting a certificate at the end of it would keep them energised and focused. Actually, I'm just the same too, and relished the idea of adding another piece of paper to my wall. We worked on our proposal as a group, and the kids really contributed to the list of activities we were planning. 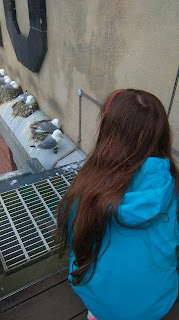 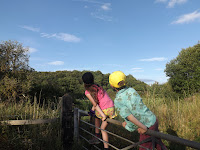 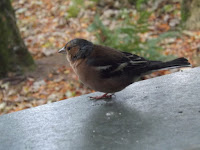 One thing that this trip really emphasised for me is the kind of wild creatures that really capture children's attention. I'm a very keen birder, and I'm trying to encourage them in that direction. Sometimes it's very successful. Last year they had wonderful trips to see a Starling murmuration and a harrier roost, where they saw their first Hen Harriers (a species they'd learned about at school as part of the skydancer project) before the sky filled with swirling snow and swirling Marsh Harriers. They also loved watching half a dozen Red Kites soaring together along the Derwent Valley, a trip my seven year old son had requested after seeing one of the birds painted on the side of a bus! They do well with those kinds of big spectacles. They also love any opportunity to get close to birds, as they did with the Kittiwakes on the Baltic and the Chaffinches we saw perching on the hide windowsill at Kielder. However, outside of these encounters it's hard to generate a lot of enthusiasm for the kind of birding that makes up a large proportion of my life, trying to id waders or ducks on a large pond or picking a warbler out of a leafy canopy. This is understandable, they are still young and that is a lot of effort for not a whole lot of reward if I am honest.


What my kids love is creepy crawlies, bugs, insects, minibeasts, and things of that ilk. They've been going pond dipping and rock pooling for years, and it does allow them to get really close to the creatures they are looking at, literally hands on in some cases. This was something we were very prepared for on this trip. The holiday lodge we were staying in is a few minutes walk away from the Cumbria Wildlife Trust's Barkbooth Lot reserve, a fantastic, quiet little nature reserve that combines woodland, a stream and an open fell top area with an excellent selection of butterflies and dragonflies. 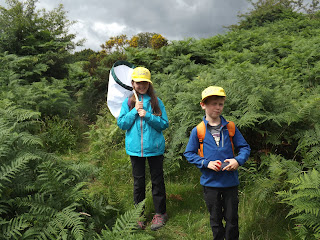 We spent several days there, armed with our new sweep net, butterfly net, pooters and collection jars. Before they went too wild, however, I gave them all strict instructions around the proper use of the equipment, including not to try and catch any of the rare and protected Fritillary Butterflies we might see, and to be careful around the ponds with leeches. They learned about teneral dragonflies and to be particularly careful with them. They learned to stick to the paths, such as they were through the ferns, and not to disturb the anthills that dotted the landscape. 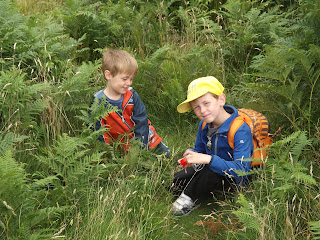 As it happens, it was one of the quietest summers I've ever seen there for butterflies and dragonflies. The only large dragon we saw was a single Emperor, none of the other hawkers or chasers seemed to be present. Likewise, last summer I saw three different Fritillary species in one afternoon. This year I saw none, though my daughter was thrilled that the first butterfly she managed to catch was a Gatekeeper, a rare species that I got rather excited about. 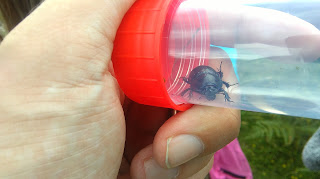 The lack of "rares" didn't bother the kids at all, and all day long I was being presented with minibeasts of all descriptions, with Shield Bugs, moths, Ladybirds and my first ever dung beetle. Some of them I could identify, but many others were photographed for future reference. 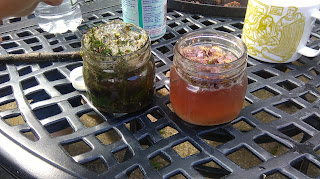 A core part of my child-rewilding project has been the National Trust's 50 Things to Do Before You're 11 3/4, and I took an idea out of their Extra Messy edition. Each child had a jam jar, that they collected berries, petals and anything else they found to make a smelly potion (that was NOT for tasting!). Back at the lodge we added water, and then baking powder and vinegar to make bubbling smelly potions. This was great fun and I'll definitely try it again. We had a lot of debate about who had the best smelling potion, the nicest looking potion and the bubbliest potion and there was a surprising amount of variation on every count. 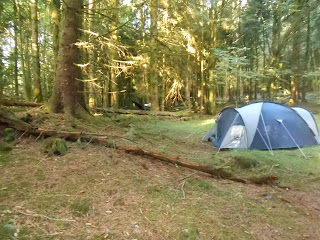 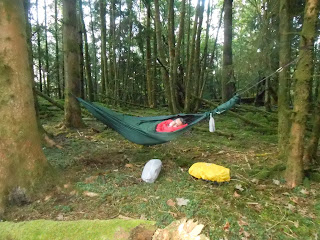 Of course the National Trust aren't the only ones who promote wild experiences for children, and it just so happened that we were away over the weekend of the RSPB's Big Wild Sleepout. my kids tried this last year with a tent in their back garden. They must have liked it because they ended up sleeping out there for almost a week. Last year I started getting into microadventures and wild camping though, and I wanted this year's to be a proper wild sleepout. So after a bbq dinner we headed up into the woods opposite our lodge to find a decent spot to camp. We'd been for a walk there earlier in the trip and found an excellent clearing near the top, but walking up in the dusk we settled for a smaller but just as serviceable clearing that wasn't nearly as far. There was a nice, flat grassy area for the kids to pitch their tent and a wide choice of trees for my hammock. Everybody slept really well up among the trees, giving me the confidence to try slightly wilder sites in future, and my older two are quite keen to give hammock camping a try, after climbing into mine the next morning. 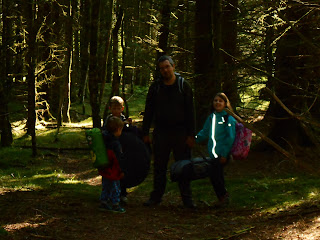 It was nice to be able to pack up in the morning though, and be back at the lodge ten minutes later for breakfast. Maybe in 2017 we'll just try hammock camping in the same bit of woods, and build up from there.
Posted by Liam at 05:13