I had actually been planning this trip for about a year now.  Last summer I was just getting into butterflies, and I discovered that Wingate Quarry in Durham had a colony of Marbled Whites, a butterfly I'd never seen but which looked quite special.  Then I discovered that Bishop Middleham Quarry, nearby, had a colony of Northern Brown Argus, another one I'd never seen.  It was late in the summer when I finally got down there last year, and not a particularly good day.  I made it as far as Wingate and found a single Marbled White before the rain started.  So it went onto the list for this year.  I got down there in mid-July for a day out with my mum.

The weather didn't look quite perfect, but certainly good enough; dry with sunny spells.  It turned out to be a lot better than that.  It was lovely and sunny at Wingate Quarry.

It clouded over and even threatened rain when we stopped at Castle Lake to look for Corn Buntings and I was starting to feel a bit doubtful about Bishop Middleham Quarry at that point but when we got there the sun came out again for a brief, glorious ten minutes, only to start raining when we got back to the car. 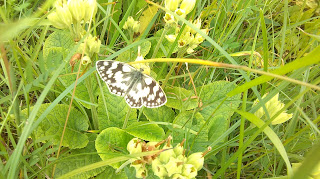 The butterflies were wonderful.  Wingate Quarry was alive with Common Blues (my first of the year), Meadow Browns and Ringlets, and on the small hill near the entrance I found a good half dozen or so Marbled Whites showing beautifully.  After seeing one last year, I'd declared this to be my favourite butterfly and seeing so many more only strengthened its position! 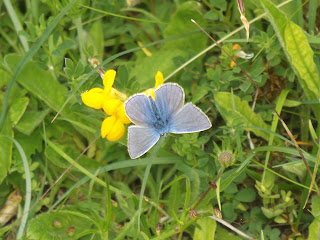 Blue butterflies come very close though.  They are so photogenic and bright.  Before this month I'd only ever seen a handful, so it's been lovely seeing them in much greater numbers. 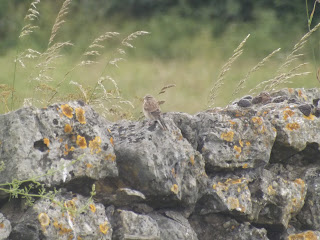 Castle Lake was harder work.  The whole area seemed overrun with thistles and I couldn't get a clear view of what was on the lake itself with my binoculars, maybe because I didn't know the area.  There was only one significant target here though: Corn Bunting.  I'd actually had Corn Bunting on my life list for a while, as I'd identified a bird along Druridge Bay as one back in April 2014, right when I was starting to get back into birding.  I later took it off when I learnt a bit more and decided that it probably hadn't been what I'd thought.  I'd known about the Castle Lake birds since the start of the year but even though it was a potential lifer I'd been putting off a trip there until I could combine it with the butterfly hunting at the nearby quarry.  A good walk around the western half of the lake revealed nothing though, and I met up with my mum again on a hilltop and declared myself defeated.  We started back for the village when I spotted something sitting on a wall nearby.  A quick check with the binoculars and I was ticking my first Corn Bunting.  It's not the most spectacular of birds, but is rather nice in its own way and I was happy to finally see one and put that earlier error to rest. 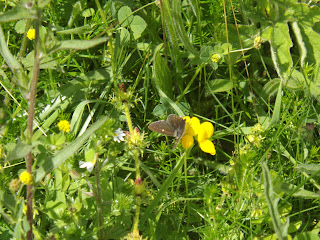 On to Bishop Middleham Quarry, where the gathering gloom gave way to a brief spell of sunshine.  We didn't stop long here, because we were getting hungry and the weather didn't look promising, but it looks like a really lovely place to come back to for a longer walk.  Luckily there were plenty of butterflies near the entrance and I put my mother to work trying to spot one that looked like a Northern Brown Argus.  Several dozen Ringlets later, I realised that wasn't really working as a tactic.  Meanwhile I was carefully checking female Blues, though more than a little uncertain what I was actually looking for.  Then I realised that there were a lot of small butterflies flitting around that I hadn't really noticed at first.  They were brown, but significantly smaller than the Ringlets and had been overlooked by the both of us as probably moths.  I was pretty sure these were my Argonauts and when one stopped long enough for me to get a decent photo the white spots seemed to clinch it!  My third butterfly lifer of the year! 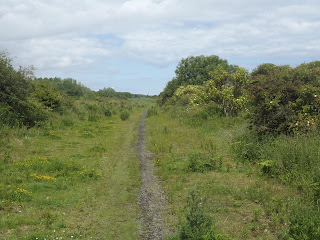 The next day was another nice, sunny day.  After a morning appointment with my work advisor I headed up for a new site for me at Cambois.  Someone on Twitter had told me about this when I was asking about his Grayling sightings, and it was just as well he'd given fairly detailed directions or I never would have found the place.  I walked through from Bedlington Station, a couple of miles towards the North Blyth coast.  Then in the middle of the Cambois Industrial Zone, where the power station once stood I left the road, pushed through some shrubs and weeds and climbed up a small bank.  At the top I was genuinely amazed.  The landscape just opened up in front of me with a long grassy path stretching north.  On my left were enough trees to hide the post-industrial landscape.  On my right was another bank leading up to a similar path on a higher level. 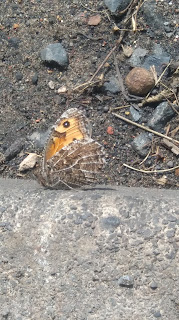 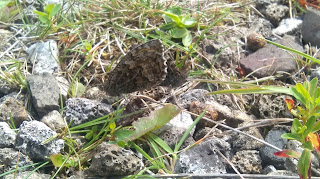 I've seen Grayling once before.  I was at St Bee's last summer on the Cumbrian coast, looking for Black Guillemots without my binoculars, a truly fruitless task!  Unable to see many of the sea birds, I instead borrowed my dad's camera and took photos of the many butterflies on the coastal path.  Most of them were Meadow Browns and Ringlets and it was only later that night in my tent that I realised that one of my shots was actually a really bad photo of a Grayling.  So it wasn't a lifer, strictly speaking, but it was definitely one I really wanted to see again properly.  And Cambois didn't disappoint.  After a few common species and some nice Damselflies, a Grayling settled on the path in front of me and started tilting its wings into the sun, behaviour I'd only read about.  It kept flitting away and then settling in more or less the same spot, though it proved very difficult to photograph.  I had a walk further along the path, where I saw plenty more Common Blues and my first ever Green Tiger Beetle.  Then before I left I climbed up to the top path and immediately in front of me I found a pair of Grayling settled together.

Funnily enough, the best views I had of this difficult butterfly were on my way home, when one kept flying just ahead of me and landing on the steel fence of the industrial zone and then on the kerb!
Posted by Liam at 05:46